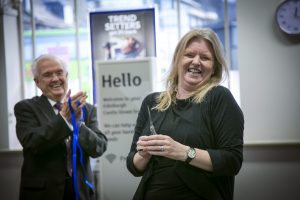 I [Founder of Stand Up and Be Counted, JoJo Sutherland] get asked to appear at a variety of different events but this certainly was a first for me – opening the newly refurbished RBS branch on Castle Street in Edinburgh.

I was hoping that I would be rewarded with a lifetime supply of cash but truth be told they struggled to find a pair of scissors to cut the ribbon with!

When I first needed a business bank account, I was assigned a business bank manager in the form of an incredible woman called Angela Tunnah. She was the one who first suggested the idea of using my comedy skills as a way to help and train other women in business through RBS.

She was the one that first put a group of business women together and had me talk tips, I had originally hoped for an overdraft but hey that is how Stand up and Be Counted became established and helped me not to need an overdraft!

The realisation that the skills that I use to engage audiences within 30 seconds of taking to a stage and keeping their attention for a set length of time was indeed of great interest to many.

The psychology used to understand and deliver to any size of group forms the backbone of the workshop programmes that I deliver to women (and men) in a variety of different business set ups.

The new look branch is very hi – tech with more machines than tellers that I’m sure can make tea as well as dispense ten pound notes. 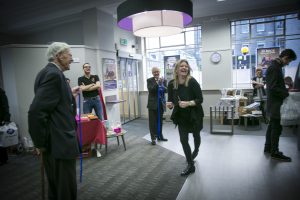 It therefore came as a bit of a shock a few days later to read the announcement about RBS branch closures one of which would be Castle Street.

I promise it was nothing I did that led to this!

IF you would like to entire about JoJo Sutherland appearing at any of your business events contact us.